Celebrating 30 years of the special relationship between AGBU and AUA

In the heart of Yerevan, a 90-step public stairway on Baghramian Avenue leads to a building where once socialist conferences of Soviet Armenia were held, but which now welcomes generations of students to equip them with western-style education. The American University of Armenia (AUA) was indeed not established overnight, and the idea, ironically, came about in Soviet Armenia.

It was 1988 when the devastating earthquake of Spitak shook Armenia, ruining almost half of its cultural capital, the city of Gyumri. As a quick response to the disaster, along with massive aid pouring into the country, many professionals were coming to offer their expertise—among them AUA co-founders Dr. Armen Der Kiureghian and Dr. Mihran Agbabian. Recalling how they found a book in the rubbles of the Polytechnic University entitled Strength of Materials, Dr. Der Kiureghian believes, “If the practitioners had followed what was in that book, the devastation would have been nowhere near as bad as it was.” The lack of professionals and the need for quality education became apparent to them straight away. 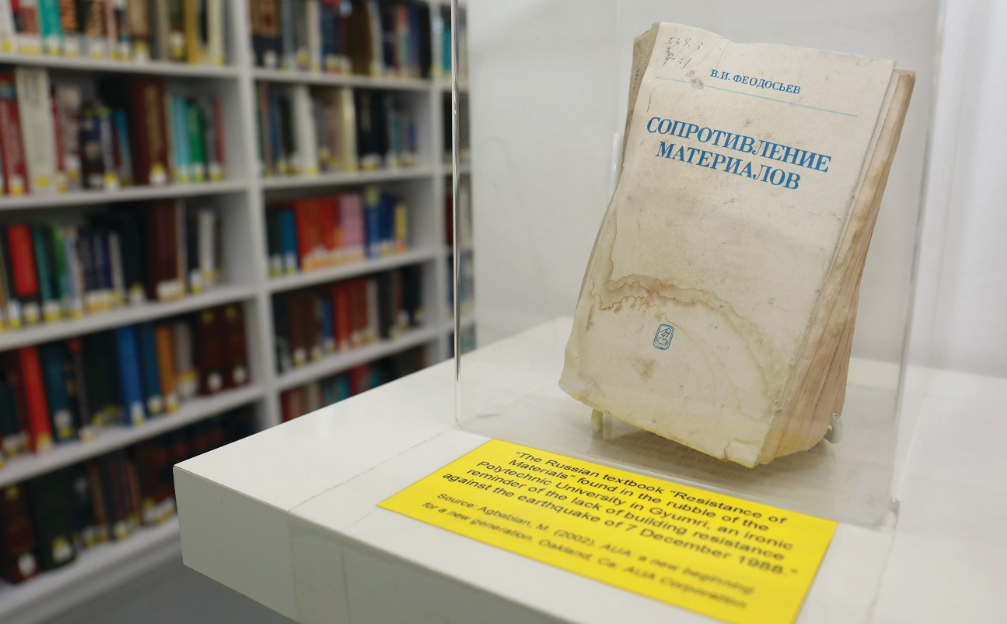 Two months later, at a kash (a traditional Armenian dish) table, when Yuri Sarkisian, then Armenian Polytechnic University rector, suggested bringing a western-style education to Armenia, Dr. Der Kiureghian stuck to that idea and soon after sent the proposal drafted by him and Dr. Agbabian to several potential donor organizations. “Among several responses we received, there was this short letter from Louise Manoogian Simone, who was at the time the executive vice president of AGBU, stating that it was an excellent idea and AGBU will commit funds to it.” Besides the fund-ing that helped cover the university’s operational costs during the first two years, Manoogian Simone insisted on an affiliated collaboration with an American institution to guide the university’s governance structure and functionality.

Eventually, with the joint efforts of the University of California, AGBU, and the Armenian government, which granted permission for unrestricted use of the Shahumyan building, on September 21, 1991, the same day Armenia declared independence, the American University of Armenia opened its doors to its first 101 students.

Throughout the coming years, AGBU established endowment funds to keep the university standards at their highest. Many research centers, labs, and resources bear the signature of the AGBU endowments, including the AUA Acopian Center for the Environment and the AGBU Papazian Library, the largest English-language library in the South Caucasus. Since 2014 AGBU has also ensured financial assistance for over 250 students who otherwise would not have access to the desired programs. “AUA is one of the key institutions in Armenia that can guarantee the empowered future of Armenia. As an organization empowering generations for over a century, AGBU values the role of AUA in shaping future-forward mindsets and instilling principles and values that align with the Union’s mission,” assures AGBU President Berge Setrakian.

The Educational Gem of the Region

AUA now is a highly prestigious University in the South Caucasus that offers western-style quality education, equips students with empirical knowledge, and promotes critical thinking, raising the demand for its graduates in the job market within and beyond Armenia. Currently, over 85% of its alumni live and work in Armenia, benefiting the communities and organizations they step in. “One of the reasons Krisp became a successful startup was my ability to navigate between various business processes, such as finance management, business development, negotiations, and more—an irreplaceable package of knowledge and skills I received at AUA’s MBA program,” notes AUA Distinguished Alumnus Artavazd Minasyan (MBA ’12), co-founder of Krisp, an AI-powered noise reduction startup. 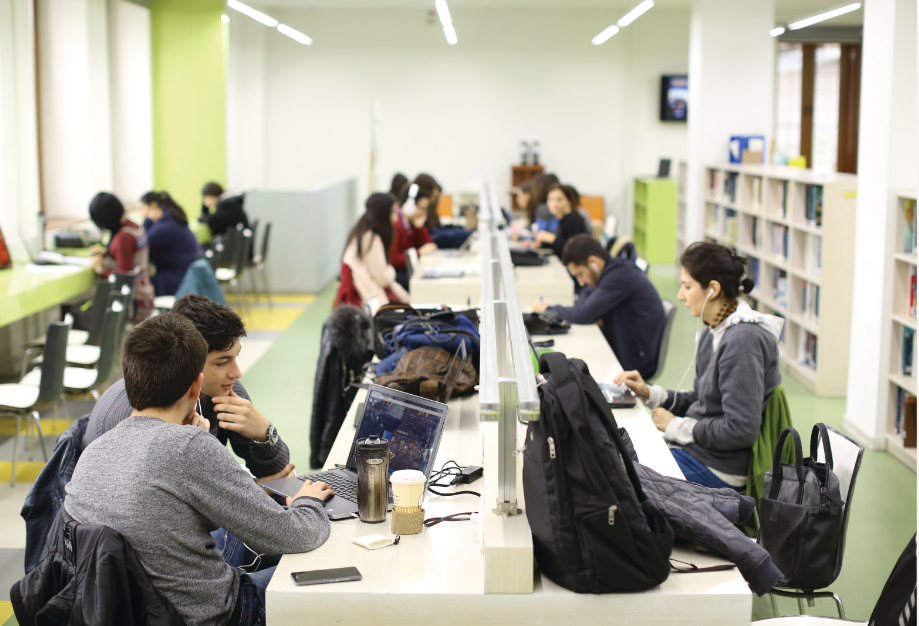 Engineering student Shantal Adajian (BSES ’22), one of the many students who take advantage of these research centers, remarks, “The 44-day Artsakh War has shown that producing drones is critical for the country’s security. But drones can also be useful for other purposes, such as agriculture or construction. Armenia has all the potential to advance in this industry, and I am glad AUA allowed me to be part of the ResponDrone project and have my share of contribution to it.”

Moving into the fourth decade, AUA’s current leadership has developed a proactive strategy to address the needs of Armenia and the depends of a changing world. Additionally, acknowledging the growing demand for STEAM educa-tion, the university aims to expand into the third campus, the Science and Engineering Building, which will house cutting-edge laboratories and support boosting Armenia’s development potential. “In this era of advanced technologies, we have the unique responsibility to grow Armenia’s human capital by preparing and educating multi-skilled and competent leaders who are adept at turning information and knowledge into innovation, insight, and making an impact on a large scale. For that, we need to constantly develop the university programs and infrastructure to fit them to the 21st-century university needs,” notes AUA President Dr. Karin Markides. 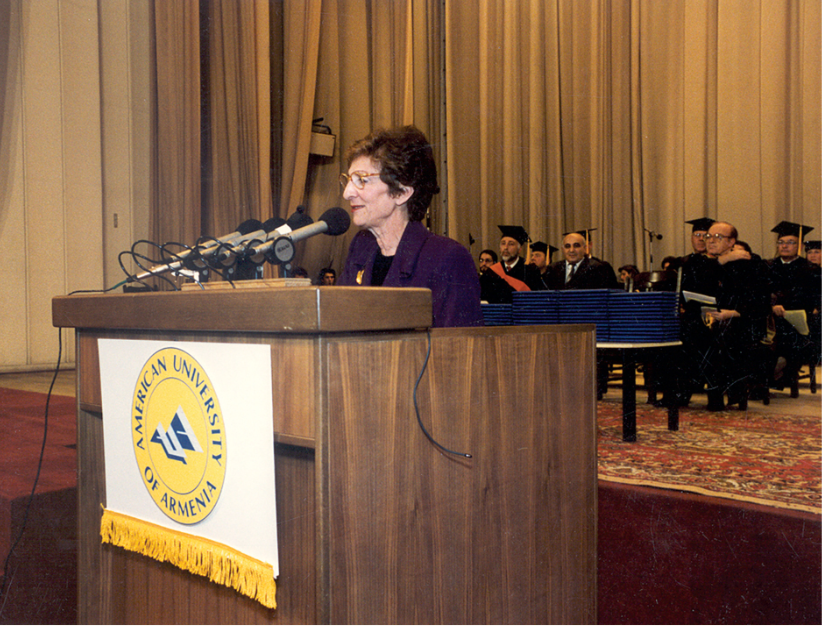 AGBU Magazine is of the most widely circulated English language Armenian magazines in the world, available in print and digital format. Each issue delivers insights and perspective on subjects and themes relating to the Armenian world, accompanied by original photography, exclusive high-profile interviews, fun facts and more.

The portrayal of heroic women in Armenian myths, legends, and fables
END_OF_DOCUMENT_TOKEN_TO_BE_REPLACED

Unlikely global icons and celebrities who have visited Armenia
END_OF_DOCUMENT_TOKEN_TO_BE_REPLACED