Their work can be considered vital, holy, substantive, and perhaps even dangerous, but independent Armenian women’s organizations founded by women to benefit women in both Armenia and the Diaspora are critical to the prosperous future of the Armenian Nation.

In the pre-and immediately post-Genocide years, official advocacy by women was limited to establishing schools or orphanages. One such school was founded in 1866 by Sister Serpuhi Kalfayan and still exists in Istanbul. Uruguay’s Armenian Women’s Benevolent Union, established in the 1940s by Hripsime Costanian Marcarian, brought together younger women to cement their Armenian identity. These are but a few examples of the bonds of Armenian sisterhood that have been forged over time.

While the traditional Armenian woman was once considered the hearth of the home, the modern Armenian woman takes on numerous identities and responsibilities. There is no singular definition of who she is, or should be, except to be true to herself. Women in the first Armenian republic were granted the right to vote in 1918—even before women in America—but the status of women in post-Soviet Armenia reverted to the patriarchal system. Poverty, as well as tensions with neighboring Turkey and Azerbaijan, ran rampant, and the nation was nursing the societal scars of communism.

In the Diaspora, large pockets of Armenian populations thrived, but the volunteer roles for women encompassed their same caretaker responsibilities: advocating for orphans, education, and the elderly. No independent groups that were founded by women to help care for each other exclusively existed. With pressure on them to marry young, forego higher education/give up a career—they needed official sisterhood and support, as well.

The following is a select representation of the numerous women’s groups in Armenia and the Diaspora that are addressing relevant issues facing Armenian women and girls. 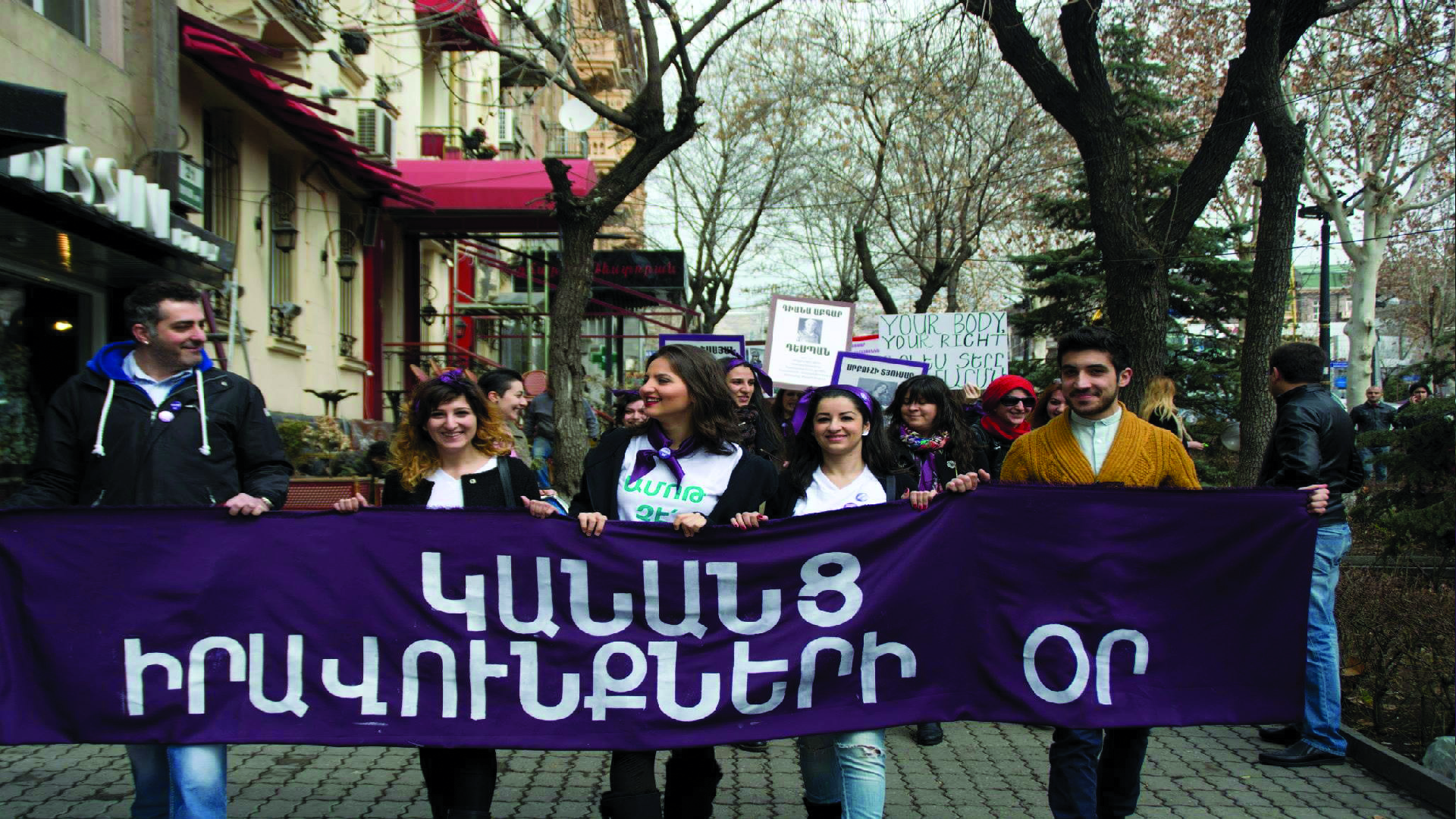 During the time of Armenia’s independence movement, which coincided with progress in the American women’s movement, three Boston area Armenian women—Eva Medzorian, Barbara Merguerian and Olga Proudian—realized  together that there was no Armenian women’s organization dedicated exclusively to the interests and needs of women. So, in 1991, they created one: AIWA. Its first effort in Armenia was to sponsor doctors from Harvard Medical School to train medical personnel at the Women’s Reproductive Health Center in Yerevan; then came UN NGO status, participation in worldwide conferences, and more. These days, AIWA distributes annual scholarships and grants, and makes available its publications by and about Armenian women. It also utilizes  its UN Economic and Social Council (ECOSOC) and Department of Public Information (DPI) accreditation status to continue supporting equality efforts globally, and is responsible for hosting a panel every March as a member of the UN NGO Commission on the Status of Women.

In 1994, Hye Geen founder Sona Yacoubian and a group of Armenian-American women in Southern California had a vision to honor the achievements of Armenian women by promoting their critical role in the family and society through research, education and advocacy.

Since then, the organization has expanded to Armenia, becoming a vital resource for underserved women in Armenia through five Pregnant Women’s Centers in Gyumri, Vanadzor, Talin, Charentsavan, Yeghvard and Yerevan. As of 2020, over 10,000 newborns and mothers have benefited from the health and nutrition programs available free of charge, along with a network of support to empower families to thrive.  In addition, Hye Geen organizes conferences and lectures on current women’s issues, publishes a global magazine, and produces Hye Geen TV program content to engage and support women of all interests and backgrounds.

Armenia now has two full time shelters for victims of gender-based violence (GBV), thanks to the vision of Maro Matosian, who established the Women’s Support Center in 2010 with grants from USAID, AIWA, and Tufenkian  Foundation. Matosian indicates that former U.S. Ambassador Marie Yovanovich was a driving force to launch the Center’s programs to prevent domestic violence, and erase myths and stereotypes.

The Center takes special interest in advocacy efforts, and was a founding member of both the Coalition to Stop Violence Against Women (est. 2010), an ad hoc alliance of feminist, social advocacy and work groups, as well as the Coalition of Domestic Violence Support Centers, which was established in 2020 with 10 NGOs from each region of Armenia.

Matosian indicates that WSC’s work in publicizing cases of femicide, and several domestic abuse public trials has raised considerable awareness about GBV in Armenia. She adds, “We have a long way to go in diminishing domestic violence in Armenia. It requires a multi-sectoral response from the state and women’s issues NGOs, not only in protecting victims, but also in combating gender inequality which is the true cause of such behavior.”

The next generation is ensuring that help for GBV victims is immediate. Mariam Torosyan launched the app Safe YOU in mid-2020, giving women the opportunity to record up to seven free audio messages, which are then sent to their local police station; three trusted contacts; and partnering NGOs simultaneously. The recordings can later be submitted as evidence. The app, which has received financial backing from governments, World Bank and the UN, among others, already has some 25,000 users in Armenia, Georgia, and Iraq, and is looking to expand to other countries. The Forum section allows users to also link with women from their community to discuss critical topics, and the Network section connects victims to local professionals, government offices and NGOs.

Armenian women can be multitasking ninjas but must be unburdened from gender stereotypes. We need to cultivate the next generation to learn that we are equal.

Always ready to challenge the patriarchy, Lara Aharonian, a diasporan repatriate, received multiple death threats after giving a public speech in Yerevan on LGBTQ rights in 2019, but she was no stranger to the game. She had founded the Women’s Resource Center (WRC) with Gohar Shahnazaryan in 2003, which is a feminist human rights organization and spreads feminist ideology. While there was surely resistance to the group back then, she notes, “Women’s NGOs are developing further and working more collaboratively on thematic issues now. They are also becoming more intersectional and working with different communities. At the same time the challenges are becoming harder with the anti-gender/anti-rights movement being active in Armenia.”

Aharonian and Shahnazaryan also co-founded The Women’s Fund in 2018, which has supported more than 100 local projects on diverse initiatives and empowerment projects. One grant funded a women’s/girls’ cycling group in Sevan to tackle stereotypes: another archived women’s oral stories through feminist approach.

Aharonian adds, “Women NGOs try to find among them locally and regionally new strategies to continue working on rights, while facing many attacks and smear campaigns. Despite the challenges, these groups are creating safe spaces for women and girls to raise their voices and collaborate on common actions.”

Armenia’s female citizenry knows it must rely on each other for real change, and where better to start than their own villages. Women from Nalbandyan (bordering Turkey) who began meeting casually became The Nalbandyan Women’s Club. Women from neighboring villages and other regions began to join, and the club became a lifeline for its members.

Grants from organizations like Kvinna till Kvinna and Democracy Today/Armenia allowed the women to establish agribusinesses, providing a stable livelihood for them and their families. As a result, they have more agency over themselves and influence on society. These women also share a microloan fund, a symbol of trust and encouragement among members. Those who need to invest in their businesses take out a small loan with a low interest rate and pay it back within a few months.

Interestingly, other groups covered here also receive funding from Kvinna till Kvinna, (“Woman to Woman”), which was founded by Swedish women in the early 1990s. They have been helping in Armenia since 2004, with an aim to combat GBV, educate young women about their rights, and assist with women’s issues in border regions.

The women’s movement in Armenia is a bustling landscape covering a myriad of interests. Other groups include the Armenian Young Women’s Association (AYWA), which offers leadership and business courses, among many other projects;  Agate in Gyumri seeks to integrate women with disabilities into the larger community; the Sexual Assault Crisis Center advocates for a victim-centered approach in the judicial system; FemLibrary offers a full inventory of books and other media related to women; Right Side NGO is the first trans and sex workers rights defender group in the region to prevent human rights violations; Sosé in Goris offers several programs, including leadership clubs and a political school.

“Through community connection and direct action, Kooyrigs (Sisters in Armenian) hopes to deliver the endearing support a ‘big sister’ would,” says founder Karine Eurdekian of the U.S. In 2018, she launched a social media platform to spark critical human rights conversations among Armenians. But in 2020, the humanitarian crisis caused by a port explosion in Beirut galvanized her to deliver menstrual period kits, indicating, “We promote communal wellness because at the end of the day, our work is about making sure our sisters have what they need, without shame or judgement.”

When the Artsakh War erupted a few months later, she and her team noticed a glaring lack of immediate aid resources for pregnant women—miscarriages skyrocketed as they were forced into bunkers for months, so Kooyrigs launched Project Mayreeg. The initiative provides custom monthly support boxes, financial assistance for healthcare, transportation to medical facilities and access to educational workshops.

Eurdekian adds, “I would like to see more public displays of allyship for women’s rights advocates, in conjunction with greater funding for endeavors that amplify and preserve their voices.”

Launched in 2017 on Facebook, this  platform offers Boston-area women a safe and inclusive way to network and share ideas, and grew to over 2,300 members across North America and Armenia. The all-volunteer group also hosts local educational and literary events.

Launched in 2021 by indigenous  Armenian women from Turkey and SWANA countries, Parrhesia Collective posts on social media in Western Armenian, English and Turkish, and organizes webinars with  renowned authors, artists and academics on the identity and history.

Their mission statement is to tell the truth—an admirable charge for citizens of a country that forces its people to live in denial. Looking to create a more inclusive indigenous women’s network globally, for Armenian women from Turkey or living elsewhere, they believe this is the most challenging undertaking ever.

A critical point discussed in the group is extraction as it relates to genocide, which the collective views as a multi-layered concept. They note, “Genocide is the utmost form as it extracts land, natural resources, money, and people’s lives, but it does not finish there. Today, our autobiographical knowledge and histories are extracted and used against us in many forms. The workshops cover all of these.”

Torosyan of Safe YOU sums up the goal. “Armenian women can be multitasking ninjas but must be unburdened from gender stereotypes. We need to cultivate the next generation to learn that we are equal. By popularizing male inclusion in family care and giving women more opportunities, our nation thrives. On this point, I am optimistic.”

The portrayal of heroic women in Armenian myths, legends, and fables
END_OF_DOCUMENT_TOKEN_TO_BE_REPLACED

Unlikely global icons and celebrities who have visited Armenia
END_OF_DOCUMENT_TOKEN_TO_BE_REPLACED